CfP: Conference “FEMINISM AND THE LEFT – THEN AND NOW” 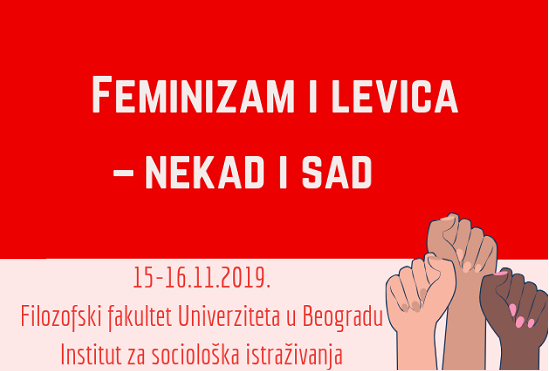 CfP FEMINISM AND THE LEFT

The Institute for Sociological Research, Faculty of Philosophy, University of Belgrade is pleased to announce a conference with international participation on the topic “Feminism and Left – Then and Now”, which will be held on November 15 and 16 at the Faculty of Philosophy in Belgrade.

The conference aims at exploring, reviewing and sharing different views on the relationship between feminism and the left, from the historical, theoretical and pragmatic/ political perspectives. The origin and development of feminism is marked by intertwining and diverging of liberal, Marxist, radical, social-reformist and neoliberal perspectives, raising the question of their mutual compatibility and contradictions. This field of research has being controversial and insufficiently studied to this day.

Although the major differences between various feminist orientations have always existed, the idea of ​​”feminisms” (in the plural) was articulated only with the emergence of the third wave of feminism, in contrast to the traditional idea of ​​a unified and common feminism built on the idea of ​​universal solidarity and sisterhood  among women. Today, it is very difficult to find a common denominator for women’s experience in general, taking into consideration that the social position of women is intersected by class, race, ethnic, religious experience, and includes various types of political priorities, political alliances, interests and identity positions, which additionally complicate the question: what is the common interest and the common characteristic of the womanhood today? Patriarchal power relations exist among women themselves, as well as exploitative relations between women exploiters and those exploited, among marginalized and those privileged. This is not only an empirical fact, but also a framework for different ideological and theoretical formulations and visions of womanhood, many of which, even when incompatible, pretend to be called “feminist”.

Is there “right-wing” and “left-wing” feminism? How to legitimize the “true” and delegitimize “false” feminism? What happens when conservative political parties present themselves as protectors of women’s rights and appropriate the feminist struggles for nationalist projects? How to interpret when the famous female political icons of contemporary feminism argue in favor of Western imperialism? How to interpret the commodification of feminism? How to explain the relationship between post-colonialism and feminism today? How to describe incompatibility between Marxist and neoliberal feminism today? Finally, is there a clear cut between the left and the right politics in the contemporary world at all, to whom “the left-wing” is applied today and how does this reflect on feminism?

The Conference Program Committee invites you to contribute to the conference by providing your insights and answers to the questions mentioned above.

Full length papers should be sent by November 1, 2019.

The working languages of the conference are Serbian, regional languages and English.

Applications (including name of the author, affiliation, title, short abstract and keywords) should be sent to one of the following e-mail addresses: