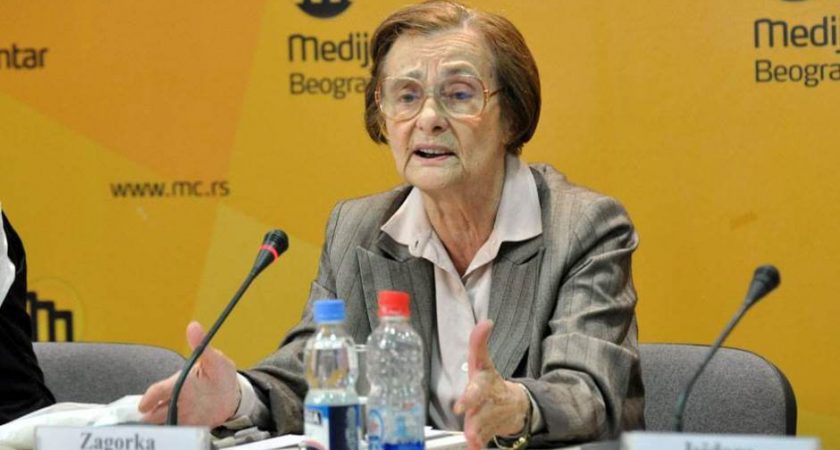 Born in 1930 into a leftist family, at the age of 14 she joined the Communist Youth, and at 15 became a member of the Communist Party and a leader in the youth organization. At 17 she got married and at 19 gave birth to her daughter, Brana. Still, she completed high school and university studies, getting a BA in philosophy at the Faculty of Philosophy in Belgrade in 1952. Between 1952 and 1954 she taught philosophy in high schools in Zemun and Belgrade. In 1957 she joined the Faculty of Philosophy, where she taught until 1975, when she was suspended, with seven other teachers. The reason was her dissidence as member of the Praxis Group and participation in and support to the 1968 student protest movement. Until 1981, Professor Golubović was unemployed, visiting as guest lecturer universities in Sweden, Great Britain, and the USA, and speaking at international conferences in Europe and North America. She thus became part of the influential intellectual circle of progressive thinkers who marked the 20th century, which included Habermas, Bernstein, Heller, Bauman and others. From 1981 to 1991 Zagorka Golubović worked at the Institute for Philosophy and Social Theory, as one of its founders. The Institute gathered critically minded thinkers, such as Vesna Pešić, Zoran Đinđić, Kosta Čavoški, Vojislav Koštnica and others. In 1991 she returned to the Faculty of Philosophy, to teach Sociocultural Anthropology until her retirement. She was the founder of the Interdisciplinary Chair in Anthropology.

Zagorka Golubović left a unique imprint on the development of modern anthropology, both within and beyond national bounds, giving it a distinctive stamp of humanistic and personalist Marxism.

Throughout her life, intellectual work and political activism toward the establishment of a just, civil and socialist society comprised two main components of the unified and comprehensive field of Zagorka Golubović’s activity. Engaging, both in theory and as an activist, in the critique of statism, class inequalities, personality cult, dehumanization of society, Zagorka Golubović bequeathed us a huge opus of published works. At the same time, she took an active part in leftist movements and initiatives. She was the initiator of the Free University, and a founder of the Nezavisnost Trade Union and Alternative Academic Educational Network. She was an active supporter of the international workers movement, for example supporting and participating in the Solidarnosc movement in Poland.

Some major works by Zagorka Golubović may be listed as follows: Man and His World, (1973), Anthropology as Social Science (1967), Problems in Current Personality Theory (1966), Family as a Human Community (1981), Crisis of Identity of the Contemporary Yugoslav Society (1988), Anthropological Portraits (1991), Social Character and Social Change in Light of National Conflicts (1995), Anthropology in a Personalist Key (1997), Impasses of Democratization in Post-socialism (1999), I and the Others (1999).

She also wrote two autobiographical works: Living against the Current (2001) and My Horizons: Thinking, Acting, Being (2012).

Professor Zagorka Golubović lived the way she wrote, in a remarkable unity of words, thought, and action that is only rarely encountered. In her own words:

„To be an intellectual means to oppose a one-sided, ideological and dogmatic view of the world. The intellectual can think in alternatives and open up paths to new, better, and humanly more acceptable solutions…. The intellectual is a person who continuously question themselves and I think that today, in these challenging times for our society, we must all ask ourselves: what has each one of us done… and what else is there that we can do, to make our society a democratic one, with a human face.“

With her demise, we lost one of the most splendid intellectuals, professors, visionaries, activists and fighters for the creation of a humane and just society in the recent history of Serbia and Yugoslavia.

Professor Golubović leaves many generations of sociologists, philosophers and anthropologists nurtured by her work and ideas.